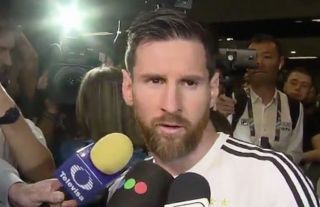 Goals from Gabriel Jesus and Roberto Firmino gave Tite’s side the victory and booked their place in the final of the competition, with Messi set to miss out on an international trophy once again.

Despite showing himself to be one of the all-time great players with a series of trophy wins and individual records for Barcelona, the 32-year-old has had to contend with being a runner-up in the Copa America and World Cup in his career with his country.

No wonder Messi wasn’t happy after this latest setback, with the Barca front-man raging furiously about “bulls***” decisions made by officials throughout the tournament, and particularly in favour of Brazil last night.

The Argentine even suggested Brazil has too much influence at CONMEBOL, which could be the kind of comment that lands him in trouble later on.

“They were not better than us. They found the net early and the second goal came from a penalty [to Aguero] they didn’t award,” Messi told reporters, as quoted by the Daily Mirror.

“They [the officials] had called a lot of bulls**t, but they didn’t even check the VAR, that’s unbelievable.

“That happened all over the game. At the first glance of contact, they ruled in their [Brazil’s] favour and this kind of bulls**t distracted us from the game.

“Throughout the tournament they called bulls**t handballs, bulls**t penalties, and bulls**t fouls. But somehow today, they refused to use VAR.

“There is no excuses for us, but we need to review this, analyse it and let’s hope CONMEBOL does something about it – but surely not, because Brazil commands too much power in the organisation.

“I think we played a great game. We made a great effort and they were not superior to us.”