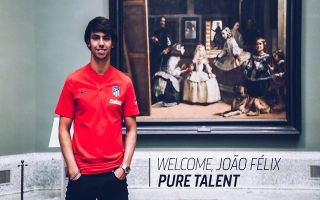 Spanish giants Atletico Madrid have confirmed the marquee signing of Portuguese sensation Joao Felix, the move for the ace is the fifth most expensive transfer in history.

Benfica superstar Joao Felix has sealed a sensational move to Atletico Madrid, according to BBC Sport, the Spanish giants have agreed to pay a whopping £113m for the star’s signature, it’s understood that Atletico’s bid surpassed the ace’s release clause – but it is set to be paid in instalments.

According to Atletico’s official website, the versatile attacking midfielder has signed a seven-year contract with the club who finished second in La Liga last season.

Here’s how the Spanish giants confirmed the transfer:

?? The Portuguese forward has signed a seven-year contract with our club ?

The attacking midfielder also made his debut for Portugal’s senior team at last month’s UEFA Nations League finals tournament, the star looks set to be a cornerstone of his country’s team for the foreseeable future.

Some fans were shocked at the price-tag for the star who has just enjoyed one breakout season, will Felix be a success at Atletico or will the Portuguese star’s transfer turn out to be costly for Atleti?

Check out some reaction to the deal below:

Ridiculous amount of money, could have bought 4/5 quality players for that price

hahahaha what a waste of money

Fans have also speculated that superstar Antoine Griezmann is headed for the exit door as the Frenchman’s number 7 shirt has been handed to the club’s marquee signing:

It won’t just be Atletico fans who will be excited to see the ace in action next season, after the star’s breakthrough season, fans all across the world will be waiting to see if the 19-year-old can start to prove his mammoth price-tag and they’ll be raring to see if the Portugal international is really ready to play at a higher level.