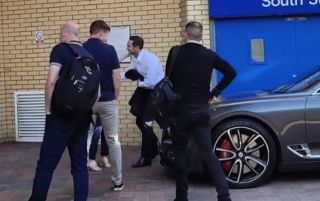 Frank Lampard has been spotted arriving at Stamford Bridge this evening, as the former Blues star edges closer to becoming the club’s new manager.

According to the Evening Standard, it’s only a matter of time before Lampard is made new Blues boss, and following these images, it seems like that announcement could be made in the very near future.

As seen below, Lampard has been pictured arriving at Stamford Bridge, with it looking like the Derby boss is now set to finally become the manager of the club he became a legend at.

Whether this appointment will be a good one or not, remains to be seen…