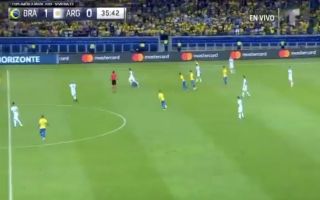 Argentina’s Lionel Messi showed off his incredible dribbling ability against Brazil in the Copa America but was unable to prevent a heartbreaking loss.

The South American giants went head to head in the semi-finals of this year’s competition on Tuesday night, with Tite’s Selecao squad ultimately earning a place in the final with a 2-0 victory.

Gabriel Jesus and Roberto Firmino grabbed the goals for Brazil, but Argentina were always a threat going forward and on another night the final scoreline might have been a lot different.

Messi is often criticised for his performances on the international stage, with many fans and experts suggesting he is not as effective away from the comforts of Barcelona, but he certainly gave everything to his country’s cause last night.

The 32-year-old’s finest moment came in the first half, as he left three Brazil players for dead with just two touches before sprinting deep into the opposition half and setting up Sergio Aguero to shoot.

Check out Messi in full flow below, via Twitter.

Messi showed his magic but his teammates always put him down pic.twitter.com/BVfrCBxzFf

No player born of any human will be greater than Lionel Messi. Ronaldo will NEVER be in this man’s level. ?pic.twitter.com/YBJp9RtZCh