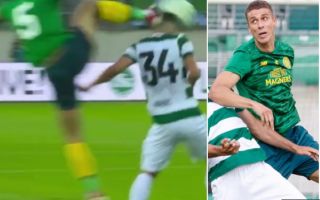 This certainly isn’t the case for Celtic’s Jozo Simunovic who may face a ban for Celtic’s Champions League opener against FK Sarajevo in two weeks time.

The Sun are reporting that Celtic face an anxious wait to find out whether the red card will result in a suspension for the Croat. The referee will report the red card to the Swiss FA but it is still unclear if the ban will stand.

VAR has been been controversially introduced over the past couple of years with opinions seeming to vary depending on whether the decision goes your teams way or not. In this case the only controversy was over why the referee felt the need to consult VAR before deciding on the red card.

Simunovic’s foot is so high it’s not even a high boot to the face – it’s more Simunovic thumping the top of his opponent’s head with his calf muscles.

If he is banned it could be worrying news for Simunovic who could now find himself as the third choice centre-back behind Kristopher Ajer and new signing Christopher Julien if they can establish a strong partnership.