Arsenal have been strongly linked with a transfer swoop for Wilfried Zaha – and stats suggest he’d be a crucial investment in a key area for Unai Emery’s team.

The latest on the Zaha to Arsenal transfer saga is that the Gunners are prepared to try an improved second bid for the Ivory Coast international after failing with an opening offer of £40million, according to the Evening Standard.

MORE: Arsenal in fresh round of talks as they edge closer to defender transfer

The report states, however, that Crystal Palace want as much as £80m for their star player, which seems out of Arsenal’s financial reach.

Still, it might not be impossible if the north Londoners can sell some under-performing players like Mesut Ozil, Henrikh Mkhitaryan and Alex Iwobi, or perhaps bring Zaha’s fee down by including players in a swap deal.

In truth, it looks almost a matter of necessity for Arsenal to get Zaha in, as these stats below from the Telegraph show: 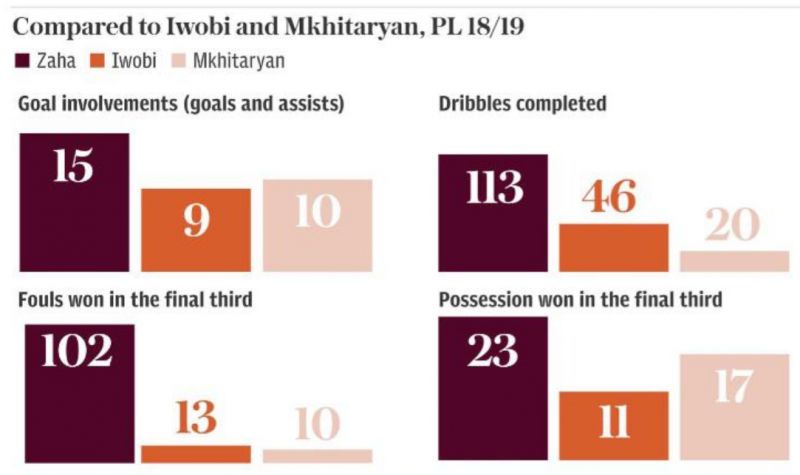 There can be no denying the sharp contrast between Zaha and Arsenal attackers Mkhitaryan and Iwobi – the difference in goal contributions, dribbles, fouls won, and possession won is enormous.

This is clear enough from watching the 26-year-old play, with his pace, skill and directness on the ball making him an absolute nightmare for Premier League defenders.

Arsenal don’t really have anyone like that, which is such a waste as they have two of the most lethal finishers in the top flight in Pierre-Emerick Aubameyang and Alexandre Lacazette.

Emery would massively benefit from being able to give his strikers more service, while the threat of Zaha would also mean defenders can’t just focus on Arsenal’s front two.

Arsenal should do what they can to get this transfer done, no matter the cost.