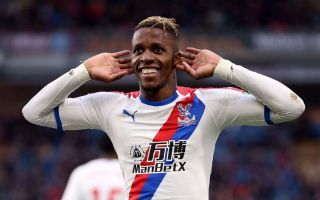 Some Arsenal fans noticed the colour of Wilfried Zaha’s hair in what they think could be a new look for the Gunners transfer target.

See below as the Crystal Palace winger uploaded an image on Twitter of himself in a shoot for The Jackal Magazine with a few streaks of red in his hair.

Unsurprisingly, this got a lot of Gooners talking as BBC Sport are among the sources reporting on Arsenal’s transfer pursuit of Zaha this summer.

Could this be a little hint from the Ivory Coast international? It certainly wouldn’t be the first time we saw something like this from players in the middle of a transfer saga…

Loving the hair colour, will look great in your photo shoot at Arsenal.

Some are pointing out, however, that Zaha’s hair has had red in it for months, and of course, there is red in Palace’s kit as well.

Here are some photos from the season just gone with the 26-year-old sporting a similar style.

Perhaps he’s just been hoping for an Arsenal transfer for *that* long – after all, his brother did say he’s a fan of the north London club…

“Given all Wilfried has given to Palace to help them remain a PL club, I hope Palace will be able to see their way to agreeing a deal with Arsenal that allows Wilfried to realise his dream of playing European Football for the club he’s supported since childhood,” his brother and agent recently said.