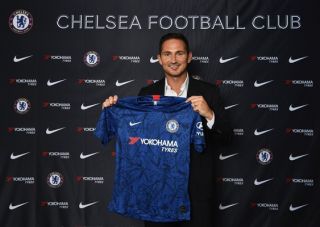 Chelsea confirmed Frank Lampard as their new head coach on Thursday and the news of his appointment has been the talk of Twitter.

Lampard will occupy the role recently vacated by Maurizio Sarri, who moved to Turin to take charge of Juventus.

Lampard spent the bulk of his illustrious playing career at Stamford Bridge, amassing 13 trophies in as many years and after an impressive first year in management with Derby County in the Championship, Chelsea have snapped up the club legend to a three-year deal.

As expected, Chelsea fans are excited to see what Lampard can do at the helm, but this hasn’t perturbed rival fans from making light of Chelsea’s seemingly ever-revolving-door when it comes to managerial appointments.

Since Jose Mourinho’s record-breaking first spell with the club between 2004 and 2007, Chelsea have had a staggering 13 managers take charge of the team in some form. With knowledge of this rate of turnover, rival fans on Twitter have joked that the three-year deal Lampard has signed may be optimistic in length, with expectations of a mid-season dumping high due to Chairman Roman Abramovich’s reputation for ruthlessness.

Check out some of the reaction to Lampard’s appointment below:

Have Chelsea sacked Frank Lampard yet?

Looking forward to Lampard being sacked in February

Me waiting for Lampard to be sacked ? pic.twitter.com/YbGr4rrh6v

£50 Slapped on Lampard being sacked by Christmas! #EasyMoney

Lampard is a @ChelseaFC Legend who gave his all to the club and will always be loved but I think the demands of the club far outweigh what he has to offer.

Lampard to be sacked by January

How long until Lampard is sacked then ?

When will Lampard be sacked bingo..anyonr wanna play.. I’m going for December..

Congrats #Lampard on the #CFC gig. I honestly can’t see you finishing any higher than 8th this upcoming season and you being fired before February but you’ll get a decent pay-out so winner winner.

I’ll give Lampard till February, defo getting fired