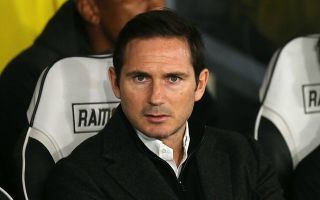 Frank Lampard’s return to Chelsea as manager today has been met with almost universal joy by all those associated with the Blues.

The former midfielder remains one of the greatest players in Chelsea’s history, having become the club’s all-time leading scorer in his playing days at Stamford Bridge, and picking up a whole host of major honours.

However, former CFC ace Tony Cascarino has one concern about Lampard from what he’s seen of him as a manager in his short coaching career so far.

The 41-year-old has just one season’s worth of experience with Derby County, and Cascarino says he noticed him being a bit too cautious with his tactics at times.

This slightly negative approach seemed to cost Lampard as his Derby side lost the playoff final to Aston Villa at the end of last season.

Of course, the former England international remains inexperienced and could improve, particularly as he’ll be working with a different calibre of player at Chelsea.

Still, if Lampard cannot bring ambitious and entertaining football to the west Londoners, it remains to be seen how long fans will be patient with their former hero.

“His Derby County side played some exciting football at times and he deserves credit for giving young players a chance,” Cascarino told the Times. “But there were too many occasions when he was cautious with his tactics, sat off opponents and they looked average.

“It happened in the league against Leeds, in the first leg semi-final play off and in the play-off final against Aston Villa — they only looked like they were in the game in the final ten minutes when Lampard made changes and played two up front.

“He cannot wait until he’s forced to attack — he did it in the second leg of the play-off semi-final against Leeds and they were brilliant with Jack Marriott joining Mason Bennett up front and Mason Mount and Harry Wilson breaking from midfield. They were aggressive in their pressing and decisive in attack and it was great to watch.

“Chelsea fans will expect the same — despite winning the Europa League and finishing third many fans were happy to see the back of Maurizio Sarri because of his possession-based playing style which, at times, left Chelsea looking laboured and one-dimensional.

“Fans will forgive the odd defeat and poor performance but they will not forgive a negative and cautious playing style. Chelsea visit United on the opening weekend and fans will be expecting them to take on Ole Gunnar Solskjaer’s side.”