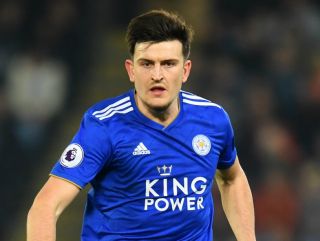 In what could be perceived as a transfer boost for Man Utd and Man City, Leicester City are reportedly eyeing Lewis Dunk as a possible Harry Maguire replacement.

As noted by BBC Sport, it has been reported that United have lodged a £70m bid for the 26-year-old, and while it’s suggested that that might not be enough to prise him away from the King Power Stadium, Man City are also specifically mentioned as an interested party.

In turn, it remains to be seen if the Foxes can keep hold of their star man, as given he has established himself as one of the top centre-halves in the Premier League and is a regular England international, Brendan Rodgers will surely be desperate to keep him and build around him rather than having to replace him this summer.

Nevertheless, with such big-money offers being touted and the calibre of the interested clubs in question, there is seemingly a threat that Maguire moves on this summer and Leicester appear to have identified a potential replacement.

According to The Sun, Dunk is one of the targets being eyed by Rodgers to fill that potential void, although it’s added that Brighton will demand £40m to green light an exit for him this summer.

The 27-year-old would be a sensible addition for the Foxes as he has plenty of Premier League experience and has similar characteristics to slot straight into the gap left behind by Maguire, should an exit materialise.

However, as Man Utd and Man City are perhaps finding out with Maguire’s inflated price-tag, Leicester will also seemingly have to splash out big money to land their preferred target and so it remains to be seen if the pieces fall into place for the transfer merry-go-round to materialise.

It’s clear why both United and City need a player like Maguire this summer though, as although they were imperious defensively last season, the reigning Premier League champions need to fill the huge void left by former stalwart Vincent Kompany.

As for the Red Devils, they conceded 54 goals in 38 Premier League games last season, giving them the worst defensive record of the top nine sides. That in itself says enough about Ole Gunnar Solskjaer’s need for reinforcements to shore up his leaky backline.