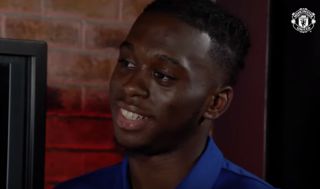 Manchester United new-boy Aaron Wan-Bissaka has explained how changing from being an attacking player to a defender has been key to his game.

Watch below as Wan-Bissaka is in discussion with Statman Dave about his impressive defensive numbers in the Premier League last season.

Wan-Bissaka topped the other full-backs in the league in a number of key areas, and he says that starting out as a forward has given him an insight into how to deal with them himself.

This is certainly an interesting watch and gives Man Utd fans an exciting glimpse into the 21-year-old’s qualities and character.