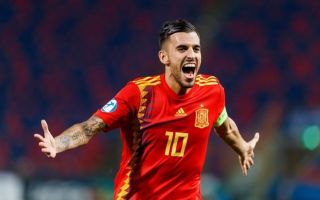 Reports in Spain suggest that Real Madrid midfield Dani Ceballos’ future lies in North London with Tottenham Hotspur but they will face tough competition from a host of fellow pursuers.

According to AS, Ceballos wants his future sorted before he is scheduled return to pre-season training on July 22. Ceballos, as well as fellow Real Madrid and Spain U21 International Jesus Vallejos, has been given an extended holiday period following their involvement in the Spanish U21s’ triumph in the U21 European Championship that concluded on June 30.

AS explain that whilst Ceballos has shown an interest in joining Tottenham and that they are the front runners, the 22-year old prefers a one-year loan as opposed to the permanent deal Spurs are aiming for, leaving the door open for other teams.

Ceballos is said to have a desire to continue to play in the Champions League, which puts a dent into the hopes of AC Milan, who are also following proceedings, as the Milanese club can only provide Europa League football. Milan will however be equipped to provide Ceballos with the amount of game time he is seeking.

Arsenal are another club said to be keeping a keen eye on Ceballos, according to Marca, and a one-year loan deal would fit in nicely with their rumoured budget restrictions, despite Unai Emery’s preference for a permanent move. Unfortunately for Arsenal, like AC Milan, they can only offer Europa League football for the forthcoming season.

The final club said to be chasing Ceballos are European champions, Liverpool, with Marca going on to say that Jurgen Klopp is looking to add some midfield dynamism after Naby Keita’s stop-start first season at the club but, like Tottenham, are interested in a permanent deal.

Marca also reports that whilst Zinedine Zidane is an admirer of Ceballos, he does not fit his plans for the 2019/2020 season. Ceballos is said to want regular playing time for the upcoming season with an aspiration to play 40 games as he sets his sights on graduating from the Spanish U21 team to the senior team and to earn a place at Euro 2020 next summer.

With Real Madrid and Tottenham seemingly on good terms, having done business in the past, Ceballos’ arrival in N17 would make sense and add a new dimension to their attacking play. Mauricio Pochettino’s Spurs struggled at times last season heavily relying on Christian Eriksen and doubts remain over the Dane’s long-term future with Real Madrid of all clubs, said to be keen, a scenario which would present Ceballos with a spot in the Tottenham team.

A move to Liverpool would offer similar perks to what Ceballos would experience at Spurs, but game time might be an issue due to Liverpool’s current wealth of attacking talent and lack of a true playmaker in their system. Moves to AC Milan and Arsenal would give Ceballos all the game time he longs for, but Europa League football may not be enough of a platform for someone targeting a spot at Euro 2020 in an already-stacked Spanish midfield.