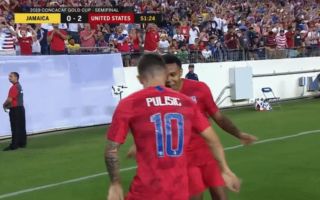 Chelsea winger Christian Pulisic scored a simple brace for the USA last night, as he helped his side reach the final of the Gold Cup.

The US beat Jamaica 3-1 last night, with Pulisic’s brace proving to be the difference between the two sides in the end.

Both of Pulisic’s strikes were rebounds which came following efforts from his teammates, however one thing that did catch our eye was his celebration following his second goal.

After his second strike, Pulisic pulled out a wacky celebration with his teammate Weston McKennie, who himself scored earlier in the game.

Seems like Chelsea fans have a lot to look forward to ahead of next season!