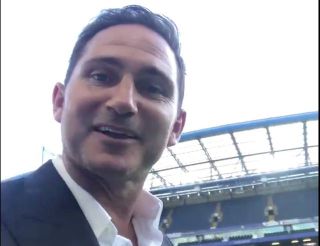 Chelsea officially announced Frank Lampard as their new manager on Thursday, and as seen in the video below, the man himself was thrilled.

Speaking from inside Stamford Bridge, the 41-year-old sent a message to the club’s supporters as he conceded that he was delighted to be back with the Blues.

With a grin on his face throughout, Lampard noted that he has plenty of great memories at the club from his playing career, but he’ll now hope to add some more as boss.

It won’t be easy given the transfer ban this summer as well as losing Eden Hazard prior to his arrival, but after making a positive first impression as a tactician during his time at Derby County, Chelsea fans will be excited about what he can do back in west London.

As per the club’s official site, he has penned a three-year deal, and so they evidently have faith in him to lead them forward as he’ll hope to extend that stay further if he can oversee more success in the coming seasons.