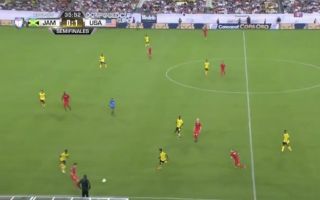 Christian Pulisic showed exactly why Chelsea decided to sign him last season with a superb all-round display against Jamaica on Wednesday night.

The United States booked their spot in the final of the 2019 Gold Cup with a 3-1 victory over Jamaica, thanks to a Pulisic brace and an early Weston McKennie strike.

Chelsea’s new midfield star signed a pre-contract agreement at Stamford Bridge back in January and completed his £58 million switch from Borussia Dortmund this summer – as per BBC Sport – with a huge weight of expectation now on his shoulders.

The 20-year-old will be the only major signing for the Blues this year due to a transfer ban and as he came in, Eden Hazard made his way out of the club by joining Real Madrid.

If the latest evidence is anything to go by, Pulisic will have no problems settling in at the Bridge, as he gave Chelsea fans a glimpse of his ability with an outrageous Cruyff turn for the USA against Jamaica.

The ex-Dortmund ace took both his goals well, but his standout moment of the match was when he turned away from an opposition defender on the left wing with a sublime piece of skill before striding towards the penalty area.

Check out Pulisic in full flow below, via Twitter.