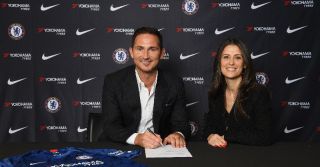 Chelsea finally confirmed Frank Lampard as their new manager on Thursday, and their fans were unsurprisingly delighted with the news.

As per the club’s official site, the 41-year-old has penned a three-year deal to seal a return to Stamford Bridge after enjoying a glittering career as a player with the Blues.

Now though, he’ll have a new challenge ahead of him as Chelsea look to continue to compete for major honours despite their transfer ban this summer and the exit of Eden Hazard last month.

In turn, it promises to be a difficult task for Lampard, but he has seemingly embraced it and is ready to test himself at the highest level after an impressive brief stint in charge at Derby County.

The former midfielder almost guided the Rams to promotion to the Premier League after just a season at the helm, but they fell agonisingly short after losing to Aston Villa in the Championship playoffs final.

He’ll now prepare for an entirely new challenge now though, as he looks to perhaps bring through youth at Chelsea in the coming months to deal with their ban, as he certainly showed a real ability to get the best out of his young players at Derby including the likes of Mason Mount and Fikayo Tomori.

As seen in the tweets below, there was unsurprisingly a delighted reaction from Chelsea fans to the news, as they welcome back a club legend looking to guide them through what is likely to be a difficult period.

Can we just all agree that whatever happens we will always support and love Frank Lampard. The man is putting his managerial career on the line to try and take us through a transfer ban straight after losing our best player, Chelsea Legend ?

I can’t believe my eyes his home. Welcome Frank Lampard.

Came as a boy ? and left as a legend.

Still can’t believe that i dream that he will be CHELSEA manager in one day and today it’s come true?

Welcome back,Frank Lampard. Wish you a very best and you’ll have our amazing support throughout the year.#WelcomeBackHomeSuperFrank? pic.twitter.com/WbmSRRFnoy

FINALLY THE LEGEND IS BACKK!!!???? OUR FOREVER MANAGER ?