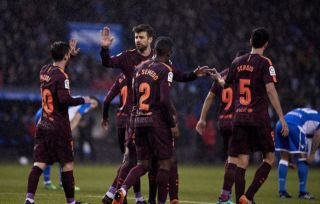 Barcelona president Josep Maria Bartomeu has confirmed that Blaugrana defender Nelson Semedo isn’t for sale this summer amid reports linking the player with a move to Man United.

Semedo has found himself battling with Sergi Roberto in the race to be named as Barca’s first choice right back these past few seasons, with the Portuguese international seemingly winning the race at the moment.

And following recent news, it looks like a few more people at the club value Semedo, and not just Valverde.

According to a journalist for ESPN on Twitter, club president Bartomeu has confirmed that the 25-year-old will not be sold this summer.

This information comes amid reports linking him with a move to Man United, with Don Balon reporting that the Red Devils are interested in the player, who the Blaugrana would be willing to sell for as little as €40M.

United don’t really need Semedo now considering the fact that they recently purchased Aaron Wan-Bissaka from Crystal Palace, a player who plays in the same position as Semedo.

However, if United were still keen on the Portuguese star, it seems like their hopes of bringing in the defender have been crushed following this announcement from Bartomeu.