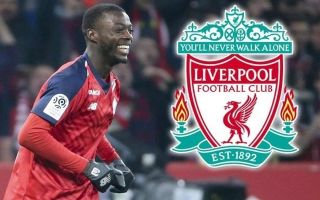 Liverpool’s interest in Lille star Nicolas Pepe seems to be concrete, the French club’s president revealed that the Reds have already held talks with the player this summer.

According to French outlet RMC Sport, Lille president Gerard Lopez has confirmed Liverpool’s interest in superstar forward Nicolas Pepe, Lopez revealed that the six-time Champions League winners have held talks with the Ivorian, although the Reds haven’t placed a bid for the star just yet.

Jurgen Klopp doesn’t need to make many signings this summer, the Merseyside outfit are just lacking some added quality in their squad and a player of Pepe’s calibre would certainly provide them with the cutting edge needed to win the Premier League.

French outlet Get French Football News have previously claimed that the versatile attacker is valued at around €80m.

Here’s what Lopez had to say on Liverpool’s interest in Pepe:

Lopez also revealed that the French club have in fact received two offers for Pepe:

“We had two offers before the African Cup of Nations, we’ll see after that, my position was to see if we could not do something before it, we had two proposals before it, I had two clubs.”

Whilst Pepe is one of the hottest stars, European giants will have to wait until the Ivory Coast’s journey in the Africa Cup of Nations comes to an end before making a move to sign the ace:

“At the beginning of the CAN, he said that being in a competition like this and having your mind to something else, it’s complicated. It is a primary career choice. In his head there are things going on. From that we add discussions with coaches and appointments between two training with agents, it will not do it. We agreed to wait until the end of the CAN, ”

Pepe is the perfect type of player for Liverpool’s fast and free-flowing attacking system under Jurgen Klopp; given the star’s ability to play out wide or up front – Pepe is exactly the type of player that the Reds could do with as they look to challenge Manchester City for the Premier League title.