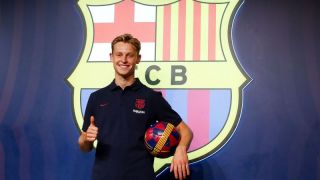 Frenkie de Jong was finally presented to the media by Barcelona on Thursday after completing his switch from Ajax this summer.

As noted by BBC Sport, the deal was agreed back in January for the 21-year-old, who will reportedly move in a deal worth €75m, while a further €11m could be paid in bonuses.

In turn, it’s a huge investment from the Catalan giants as they evidently believe that the talented midfield ace will play a fundamental role in their bid for success in the long-term future, as he looks to step in and become a long-term successor in that key midfield role in front of the defence.

The move comes off the back of an impressive year with Ajax, as De Jong helped the Dutch giants to a domestic double as well as a run to the Champions League semi-finals.

It arguably made sense for him to move on at this stage after going as far as he could with the reigning Eredivisie champions, as he will now begin a new challenge to take his game to the next level.

As seen in the video below though, it was his father who appeared to steal the show as he offered an insight into his own quality, while De Jong’s brother also got in on the act as Barcelona may well be keeping an eye on him next…