Youth tournaments offer players the chance to burst onto the scene and spark transfer bids from the world’s biggest clubs. This appears to be the case for Jose Cifuentes who looks set to pick between the Scottish and English Champions.

The Sun has reported that Cifuentes has offers from the two clubs, and is currently making his choice on where to move to.

He stood out for the Ecuadorian team, scoring the goal of the tournament and was an integral part of the side that were surprise semi finalists. Described as a creative midfielder, he looks set to leave America de Quito in his homeland.

“My aim is to play in Europe. I don’t know which club I will sign for yet – either Manchester City or Celtic,” he is quoted as saying by the Sun. “Nothing has been decided yet.

“I deserve my opportunity to play in Europe, it’s where I have to be. And my mentality is that I am going to be in Europe for a long time.”

In a separate report last month, The Scottish Sun claimed the fee for the midfielder would be around £2.5m.

The report does state there is the added complication of the player getting a work permit. The Sun believe that Celtic would be able to get a work permit, but Man City wouldnt, which would leave him facing the prospect of being loaned out to a European club first. 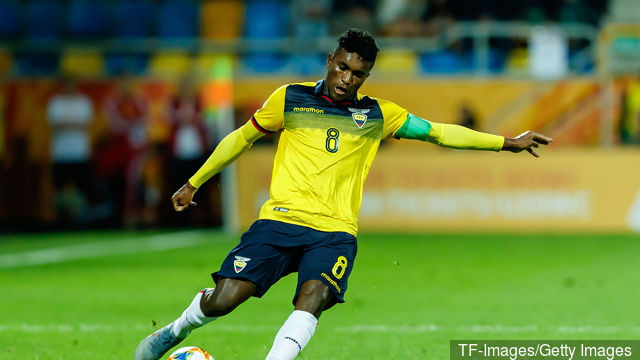 Jose Cifuentes in action for Ecuador

To add further intrigue there was a situation with Daniel Arzani last summer, where the player was signed by Man City but immediately loaned to Celtic for two years upon signing, as reported on the club’s website.

There’s no doubting that he would have a greater chance of playing first team football at Celtic, but Man City would offer higher wages so it remains interesting to see which club he picks, or if he ends up in a similar situation to Arzani.