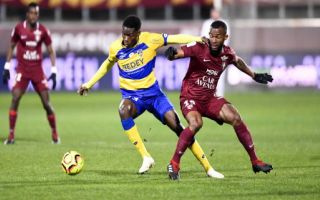 Antonio Conte’s summer revamp of Inter Milan continues with the signing of France U17 captain Lucien Agoume from troubled French side Sochaux.

Football Italia confirmed the transfer yesterday for a reported €4.5m plus bonuses. They also reported that they beat clubs like Barcelona and Manchester City to the signing of the young midfielder.

His likeness to Pogba comes through a dynamic box-to-box style, with a tendancy to break forward, whereas L’Equipe have likened him to a “little Patrick Vieira”.

Where the transfer gets more interesting is the knock-on effect it could have on the future of Sochaux who are facing demotion to the 3rd tier due to financial issues.

Getfootballnewsfrance reported that Sochaux would need to find €4m in the off season to appease the French footballing authorities and keep their place in Ligue 2.

Agoume may struggle to play much first team football this season with Inter having numerous more experienced players in midfield such as Brozovic, Nainggolan, Vecino, Joao Mario and new signing Stefano Sensi.

Even if he does take some time to break through, Agoume can make the move with his old club’s blessing, considering the transfer fee may save them from a further, crippling relegation.