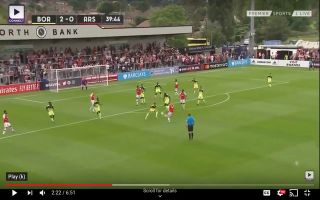 Arsenal youngster Matt Smith showcased his talent by scoring a superb goal for the Gunners’ academy side in a preseason friendly against Boreham Wood.

Talented young Arsenal midfielder Matt Smith might have caught Unai Emery’s eye with a beautifully worked goal for the Gunners’ academy side against Boreham Wood this afternoon.

The Gunners could have been embarrassed by the Minnows if it wasn’t for Smith’s crucial goal, the star scored in the 39th minute to claw Arsenal back into the clash. Steve Bould’s side had conceded two goals in the opening 15 minutes of the clash.

After a free-kick Smith picked the ball up on the edge of the box, the 18-year-old sensationally scooped the ball to his teammate before making a smart run into the box. Smith received the ball back and slotted the ball into the back of the net.

Check out Smith’s goal below:

Smith’s teammate, Tyreece John-Jules excited fans after he scored a crucial brace which saw his side claw back from 3-1 down to rescue a 3-3 draw.

Some Arsenal fans even called for the ace to be given a chance in the first-team following his spectacular performance. Check out one of his goals and reaction to his performance here.

Smith is a very talented young midfielder, the ace who primarily plays in defensive midfield provided a jaw-dropping 15 assists and scored 5 goals for Arsenal’s Under-18s in 22 appearances in the U18s Premier League.