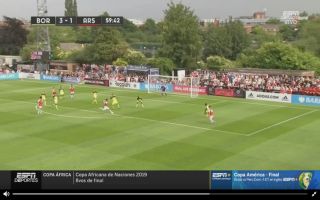 18-year-old Arsenal sensation Tyreece John-Jules was the hero for Arsenal’s academy earlier today, the forward saved the Gunners from humiliation against non-league side Boreham Wood by scoring a crucial brace for Steve Bould’s side.

Arsenal’s defensive problems could be running through the entire club, the young Gunners found themselves two goals down after just 15 minutes and the side headed into halftime 3-1 down.

Then came John-Jules, the talented ace certainly made an impact after being brought on at halftime. In the 60th minute of the clash, the star scored a lovely goal from the edge of the box – John-Jules certainly looks like a natural finisher.

The star, who has been with the Gunners since he was eight, then showed his clinical ability and cool head by scoring the all-important equaliser from the penalty spot.

Check out John-Jules’ first goal below:

Many Arsenal fans have called for John-Jules to be given a chance in the first-team following his impressive performance this afternoon:

Two goals for him in 25 minutes, and I can’t see any reason why John-Jules wouldn’t be involved in first-team pre-season from now on. Love him.

He’s got a real predatory instinct. Would love him to feature more

He’s the definition of a finisher.

John Jules with that ?

John-Jules’ chances of breaking into the first-team will be boosted following the promotion of Gunners legend Freddie Ljungberg as a first-team coach – the Swede worked with the star last season whilst managing Arsenal’s Under-23s and the ex-star can give John-Jules a glowing reference to Unai Emery.