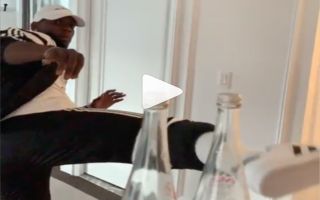 Unless you’ve been living under a rock for the past couple of weeks, you would’ve heard of the ‘Bottle Cap Challenge’.

The challenge, if you didn’t know, sees people try to remove the bottle cap from a bottle by kicking it, and Man United midfielder Paul Pogba has taken the challenge to a completely new level.

Having been invited to take part in the frenzy by Zlatan Ibrahimovic, Pogba decided to remove two bottle caps at the same time instead of one, a very impressive feat that we’re sure took him a few tries to do!