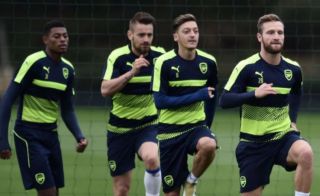 Arsenal and Germany star Shkodran Mustafi has dropped a potential transfer hint on his social media, after the Gunners star removed Arsenal from his Instagram bio and changed his profile picture.

According to the Sun, the north London side have been trying to get rid of the German international during every single transfer window since his arrival, and following this, it looks like they may finally get their wish.

As per the Mirror, Mustafi has removed the words ‘Player for Arsenal’ from his bio on Instagram, with the player also changing his profile picture to one of him not in a Gunners kit.

Now, we don’t want to get too carried away here, however we reckon this has the potential to be a sign that the Germany star is set to leave Unai Emery’s side this summer.

Shkodran Mustafi has just removed his Arsenal profile picture and removed “Player for Arsenal” from his Instagram bio. ?

Mustafi has been a liability for quite some time now, and we’re sure that if he were to leave, a large majority of Gunners fans would be glad to see the back of him.

Arsenal were very bad defensively last year, with West Ham and Man United being the only two other top half sides to concede more Premier League goals than them, something that suggests their defence simply isn’t good enough.

If this is a sign that Mustafi is set to leave, it’ll be interesting to see whether the club aim to sign a replacement for the Germany ace, and who they decide to go for should they do.