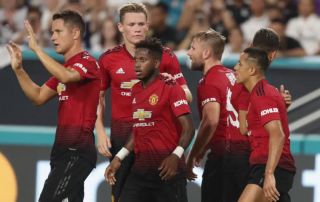 Man United midfielder Fred has been left out of the Red Devils’ squad for their pre-season tour this summer, and the reason for this has been revealed why.

United confirmed the squad they’ll be taking on their pre-season tour on their official website earlier today, with Fred being just one of a few notable exclusions.

However, United fans shouldn’t worry too much regarding the Brazilian midfielder, as the reason behind his exclusion has been revealed by a journalist on Twitter.

As per Samuel Luckhurst, who writes for Manchester Evening News, Fred was left out of United’s squad due to the fact that he is set to get married some time next week.

Fred is believed to be getting married next week, even though he appeared to have got married last year ????? . His wife has been posting about wedding plans recently. #mufc

Fred had a below-par first season at Old Trafford last year, and we bet the club’s fans are hoping to see the Brazilian have a better campaign this time round.

To do that, Fred would need to get a good, full pre-season under his belt in the coming weeks, however following this news, it seems like he’s going to be getting far from that.

However, given the fact that he’s literally getting married next week, we’re sure fans can excuse the player for not going on pre-season tour with the Red Devils.

Let’s hope his marriage goes more to plan than his first season at Old Trafford did!