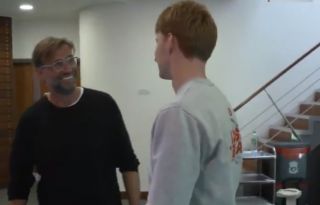 Watch the video below as the LFC boss greets the young Dutch defender and is pleasantly surprised to see how tall he is.

The teenager certainly looks an imposing figure, and if this video is anything to go by, he’s going to be involved in the Liverpool first-team, at least during pre-season.

Klopp has shown he’s ready to promote young players, and it seems he’s set to work with Van den Berg as he tells him: “Let’s get started.”