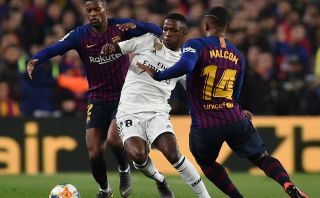 Manchester United have reportedly made their interest in the loan transfer of Vinicius Junior known to Real Madrid in the last 24 hours.

That’s the claim being made by Spanish outlet Diario Gol as they provide an upgrade on the Paul Pogba transfer saga, which continues to dominate the headlines.

It seems United could be ready to do a deal for Pogba to move to Real Madrid, with Diario Gol explaining that he’s become a priority target for Zinedine Zidane.

As a result, the Red Devils could try to land Vinicius on loan as part of the deal, according to Diario Gol, in a potentially smart move to strengthen their attack.

It could also be a fine deal for both clubs, as Real would then get their exciting Brazilian youngster out on loan to gain valuable experience of playing at the highest level.

The 18-year-old looked a big prospect whenever used in the Madrid first-team last season, but there’s no doubt he’ll struggle to play as much next term with the arrivals of Eden Hazard and Luka Jovic up front.

Man Utd fans will surely now be hoping they can get Vinicius in, with their attack in real need of more quality after dire performances from Alexis Sanchez again last season.