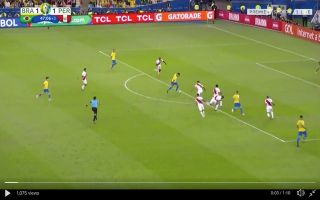 Manchester City striker Gabriel Jesus has restored Brazil’s lead against Peru in this evening’s Copa America final, the forward hit the back of the net with a tidy finish.

Brazil restored their lead against Peru during stoppage time in the first-half of this evening’s Copa America final, the Selecao won the ball back thanks to some brilliant defensive efforts from Liverpool superstar Roberto Firmino, the Champions League winner’s clutch tackle spilled the ball to Barcelona’s Arthur Melo.

Take a look at Jesus restoring Brazil’s lead below:

What a superb tournament he is having ?#CopaAmerica pic.twitter.com/7Z1yct4pLi

Jesus has been sensational for Brazil tonight, the 22-year-old created the opener for his country after some impressive skill. Check it out here.

Pep Guardiola and Manchester City fans will be excited for Jesus to return to the Premier League champions after his successful performance for his country.