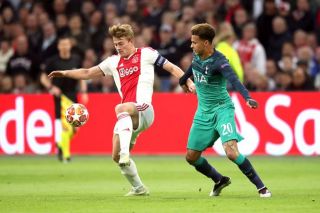 Manchester United could reportedly have been handed some small lifeline in the race to seal the transfer of Ajax defender Matthijs de Ligt.

The Netherlands international has been in demand all summer long as Europe’s super clubs queue up for the exciting youngster’s signature.

The Daily Mirror recently reported on De Ligt being worth as much as £78million as the likes of Juventus and Paris Saint-Germain pursue him.

However, the latest from De Telegraaf is that De Ligt’s transfer to Juventus appears to have hit an impasse due to the Italian giants failing to meet Ajax’s demands for him so far.

This could hand a fresh opportunity for other clubs like United to land the 19-year-old, with a centre-back certainly a pressing priority for the Red Devils after they finished sixth and conceded 54 goals last season.

They have also been linked with Leicester City star Harry Maguire in defence, with the Sun reporting that the England international could cost them as much as £85m.

If the De Ligt to Juventus deal is indeed in doubt and the Mirror’s claim that he’d cost £78m is correct, Man Utd would surely have to try their luck with a bid.

The teenager would be a superb long-term solution to improve the team’s defence, and would look far better value for money than Maguire at that price.