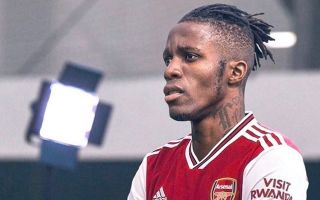 Multiple Arsenal fans were given false hope this morning when they saw a picture of Wilfried Zaha wearing a Gunners shirt.

Crystal Palace forward Zaha is an Arsenal transfer target and the Emirates Stadium outfit have seen a £40million bid rejected this summer, according to The Times.

The Times reported last week that Arsenal were planning on lodging a second bid, so the 26-year-old could still yet end up in north London.

And he would be a popular signing too.

AFTV took to Instagram on Monday morning and posted a photoshopped image of Zaha wearing Arsenal’s new kit. The image was uploaded along with the caption: ‘Want’.

The post caught multiple bleary-eyed Gooners off guard and one commented: “I woke up and thought this was real”.

Another joked: “Stop toying with my emotions”.

One reply read: “I thought that was real for a second”.