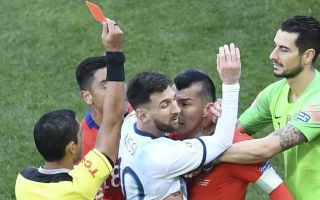 Argentina talisman Lionel Messi could face a two-year ban from international matches governed by CONMEBOL due to his corruption comments on the South American footballing body.

Messi did not have the kind of Copa America many expected him to have as he could only score one goal and provided an assist. His solitary goal of the competition was a penalty against Paraguay at Belo Horizonte.

Argentina’s run in the tournament came to an end following a 2-0 defeat to Brazil in the semifinals. Messi had a forgettable ending to the tournament as he was showed a straight red card in the third place playoff against Chile following a clash with Gary Medel. Even though Medel seemed the aggressor, the referee Mario Diaz de Vivar sent off both players. This was Messi’s second red card of his entire career so far, his first coming back in 2005 during his international debut against Hungary.

Argentina eventually won the game 2-1 thanks to goals from Sergio Aguero and Paulo Dybala while Arturo Vidal scored Chile’s sole goal. Following the match, Messi did not come out to collect his bronze medal. Messi predicted that Brazil would win the tournament because everything was set up for them.

The Barcelona forward said, as quoted by The Mirror: “There is no doubt, the whole thing is set up for Brazil. I hope the VAR and referees don’t play any part in the final and that Peru can compete but it looks tough to me.

“I did not want to be part of this corruption, we shouldn’t have to be part of this disrepect we suffered during the Copa America.We could have gone further but we weren’t allowed into the final. Corruption, referees and all the rest stopped people from enjoying the football.

“I always tell the truth and I’m honest, that is what keeps me calm, if what I say has repercussions that is not my business. I think that what happened is because of what I said [against Brazil]. What I said last time perhaps came back to haunt me. With a yellow card that was the end of it.”

This is not the first time that Messi has criticised the referees during the Copa America as he also slammed them for favouring Brazil after Argentina’s semi-final defeat at Belo Horizonte,accac as reported by the Daily Mail.

CONMEBOL slammed Messi’s comments, writing in a statement, which was published by The Mirror: “Said accusations represent a lack of respect for the competition, all the football players involved and the hundreds of professionals of CONMEBOL, institution that since 2016 has been tirelessly working to transparent, professionalize and develop South American football.”

The maximum penalty for Messi, according to The Mirror, would be a two-year ban from CONMEBOL governed international matches for his comments. Any defamatory or offensive remarks against CONMEBOL or its authorities are punishable.

Hence, there’s a good chance of the match against Chile being Lionel Messi’s final game in an Argentina shirt.