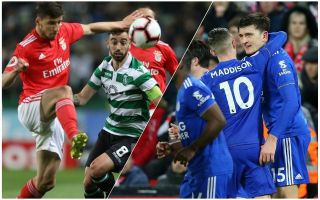 The Red Devils have been strongly linked with both players for some time now, and sources close to the club have told CaughtOffside there is a growing confidence both deals can be done.

Although Maguire in particular is likely to be expensive – possibly as much as £85million or more – United are in a strong financial situation and could even boost their transfer kitty with player sales this summer.

Sporting have also set an asking price of around £70m for Fernandes, but Man Utd believe they can get him for closer to £53m, and that a combined £138m for both players could be superb business.

That total amount is likely to be around the kind of money MUFC bring in if Paul Pogba leaves, with the Times linking him with a £120m offer from Juventus as his agent Mino Raiola confirms he is in the process of getting his client out of Old Trafford.

Romelu Lukaku also looks set to leave United this summer, with the Belgium international strongly linked with Inter Milan for some time.

Even if Pogba stays, Lukaku’s sale should bring in around £75m to add to Ole Gunnar Solskjaer’s transfer budget, so deals for Maguire and Fernandes are perfectly affordable.

Crucially, both players want to join United and have informed their clubs of their desire to be allowed the move.