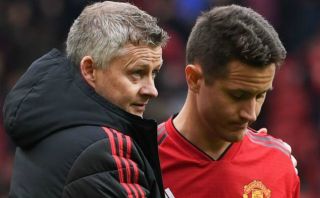 The Spain international allowed his contract to run down at Old Trafford as he completed a free transfer to PSG this summer, in what looks a potentially big blow for Man Utd.

It’s never ideal to lose a player without bringing in a transfer fee, and Herrera was a hard-working and experienced member of Solskjaer’s squad.

It seems United did try their best to persuade Herrera not to leave, but the 29-year-old has explained why he rejected their offers in an interview with Marca.

“I don’t like looking at the past,” he told Marca. “But there were differences regarding the project and my importance within it.

“I was very happy, I have a lot to thank the club for, the fans and also Solskjaer. He did a lot for me to stay, but things didn’t happen. They arrived late and, by then, I’d already made the decision to play in Paris.”

Herrera now seems very happy to be taking on the new challenge at PSG, and clearly still holds a soft spot for United as he explains he could never have moved to another Premier League club.

“I am very happy to have made that decision because I am enjoying this magnificent city, this beautiful stadium and this club, which has a glamour few can match,” he said.

“To leave United, the biggest team in England, you need something like PSG, which is the biggest in France. I could not play in another English club.

“The PSG is a group in continuous development and which is in one of the most beautiful cities in the world.”

The Red Devils could now do with replacing Herrera this summer, as Nemanja Matic and Fred were far from at their best for most of last season.