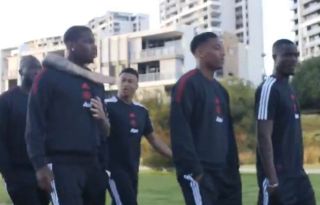 The Man Utd squad have travelled to Australia this week as they begin their pre-season schedule ahead of what promises to be a crucial campaign.

Ole Gunnar Solskjaer will run the rule over his players as he looks to get them in the best shape possible ahead of the new season, as they look to bounce back after the disappointment of last year.

Unfortunately for the Norwegian tactician, it appears as though Paul Pogba and Jesse Lingard might not be on great terms, as these Man Utd fans below spotted something interesting in a video uploaded by the club shortly after they touched down in Perth.

As seen in the clip below, it appears as though Victor Lindelof has to step in and calm things down as Pogba and Lingard have an exchange, with the latter looking less than impressed with what was said to him.

It’s unclear as to whether there was a genuine issue between the pair at this stage, or perhaps if the video has caught an innocent moment and made it look worse than it actually is.

Nevertheless, as seen in the reaction below, it has emerged as a concern for some Man Utd fans, as the last thing that they want to be worrying about is possible in-fighting among the current squad.

As noted by The Times, Pogba’s agent, Mino Raiola, has publicly revealed that his client is looking for a move away this summer, and so having him on the pre-season tour may not be the smartest idea in terms of team morale and focus.

Nothing like a walk to stretch the legs after a 16-hour flight ?? #MUFC #MUTOUR pic.twitter.com/3jc4dfVNpx

Pogba looks like he’s about to fight Lingard at 0:11 before Lindelof calms him down. Can’t tell if it’s real or not though.

Wouldn’t surprise me at all if it’s real, look at Jesse’s face ?

Nah it was real look at the facial expression

That’s actually a good spot, looks real to me. Absolute state of this squad.

Good spot id say your bang on the money

Looks real to me..

Very interesting that Pogba and Lingard are in a altercation maybe Lingard is confronting Pogba on his disrespect of the club during the summer #mufc #ManchesterUnited pic.twitter.com/epshYHRrQH

Did Lindelof just have to break up something between Pogba and Lingard?! ?? I’ve slowed it down for a closer look. #mufc pic.twitter.com/LVSp4SaGZC

Oh dear, 0:11 in, Lindelof seems to break up Pogba & Lingard. It’s all going to shit and we haven’t kicked a ball. This season could turn very sour very quick. https://t.co/UP4u6qSHpu

Pogba looking ready to fight Lingard at 0:11 before Lindelof steps in..? https://t.co/yfo67UEH54

A bit of a feud going on between Pogba & Lingard, at first glance it looked like Lindelöf was just hugging Pogba, however on second glance you see the facial expressions of Lingard & Pogba plus the body language and looks as though there is a problem. #MUFC pic.twitter.com/Il7gFiFLfU