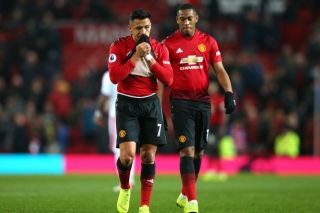 Sevilla chief Monchi has reportedly made a contract offer to the agent of Manchester United forward Alexis Sanchez as they chase a summer transfer.

The Chile international has been a major flop in his time at Old Trafford, and it would make sense if they offloaded him ahead of next season.

However, it could be challenging for Man Utd to find suitors for one of their highest paid players after such a dramatic dip in form since he joined the club from Arsenal.

It does seem, though, that Sevilla are keen on signing Sanchez as they have faith in him reviving his career in La Liga, according to Don Balon.

The Spanish outlet claim Monchi has offered the 30-year-old a deal, though it would be on massively reduced wages.

Alexis Sanchez is a transfer target for Sevilla

It would still, however, make Sanchez one of Sevilla’s best paid players, according to Don Balon, in what sounds like a potentially risky move by the club.

MUFC fans won’t care and will surely just hope they can see the back of Sanchez as soon as possible.