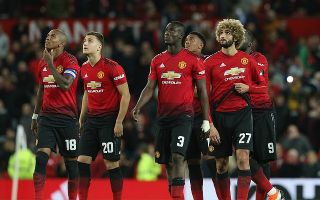 Manchester United are reportedly asking for as much as a £25million transfer fee to sell out-of-favour defender Marcos Rojo this summer.

This rather baffling fee, as reported by the Daily Record, looks very high for a player at 29 years of age who has managed just 18 appearances in all competitions in the last two seasons.

Rojo has rarely impressed in his time at Man Utd, struggling for both fitness and form, and it’s little surprise the Daily Record claim they’re struggling to offload him at that price.

The Argentine once looked a decent player at this previous club Sporting Lisbon, but he’s not fulfilled his potential at Old Trafford by any stretch of the imagination.

Quite why United won’t set a lower asking price and get this unneeded backup player off their books is beyond us, but fans will hope he can eventually be shown the door, whatever the price.

The transfer market has certainly brought about some inflated prices in recent times, but Rojo for £25m might be up there with the worst of them.