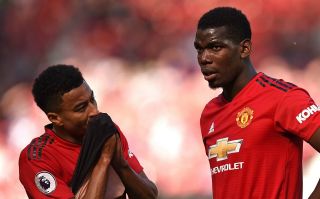 Manchester United star Jesse Lingard is getting fans talking on Twitter after uploading a photo of himself and team-mate Paul Pogba in pre-season training.

In case you hadn’t seen, a video posted by Man Utd’s official account yesterday appeared to briefly show a row breaking out between Pogba and Lingard.

In what seems likely to be a deliberate move, Lingard has now posted a photo of himself and Pogba getting along fine.

Some supporters feel this is wise by the England international, as it rubbishes the claims appearing yesterday, but others seem to see through it and are less convinced…

Looool he uploaded this on purpose https://t.co/AUsqf1bF9e

Classic media-team prompted tactic of tweeting a picture of Lingard and Pogba to attempt to quash any stories about their 'spat' yesterday ? https://t.co/dDWt6j7WDw

Clearing the rumors in style

Great publicity stunt Jesse your great at it

Ole to jesse. 'Quick upload a picture of you and paul to it looks like everythings ok'

What happened between you and Pogbar the dancing clown Jesse?

Love how you shut this media ??…but it's two way sided, pogba hasn't posted anything ?