It’s finally time for competitive football for Scottish clubs after a long summer, and Rangers kick off their season tonight in their Europa League clash with St Joseph’s in Gibraltar.

One player missing from the starting XI is Alfredo Morelos though, which should come as a surprise given he was Rangers’ leading goalscorer last season. 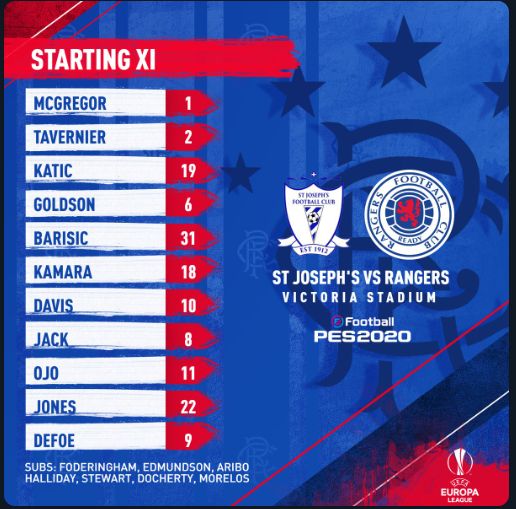 rangers line up vs St Joseph’s

There is no official explanation yet, but it’s interesting coming days after the Daily Record linked the Colombian with a move to Crystal Palace.

In his absence, Steven Gerrard has opted for Jermaine Defoe up front, with new signings Sheyi Ojo and Jordan Jones also featuring from the start.

Katic anchors the defence alongside Goldson after Joe Worrall left the club in the summer. Katic seemed to be second choice for a lot of last season, but always looked impressive and will want to secure a first team spot for this season.

Further, summer signings Greg Stewart, Joe Aribo and George Edmundson will have to make do with a place on the bench.

This should be an easy tie for Rangers, but they will be aware how much Celtic struggled in the first leg against Lincoln Red Imps in Gibraltar in 2016, with Celtic going down 0-1 in the first leg.