Everton are set to table an offer for Manchester City midfielder Fabian Delph, who has been told he can leave the Etihad Stadium this summer.

The 29-year-old was part of a squad which won an unprecedented domestic treble last season, but he was restricted to just 11 Premier League appearances in total, with most of his playing time coming in cup competitions.

The England international has been deployed primarily as a left-back under Pep Guardiola, filling in for the injury-prone Benjamin Mendy, but the emergence of Oleksandr Zinchenko has pushed him down the pecking order at the club in recent months.

According to Sky Sports, Man City plan to offload Delph to a fellow Premier League club while the market is open, with a potential bid from Everton imminent.

The ex-Aston Villa star has one year remaining on his current deal at the Etihad and City want to cash in before he becomes a free agent, with a number of clubs lining up to express their interest. 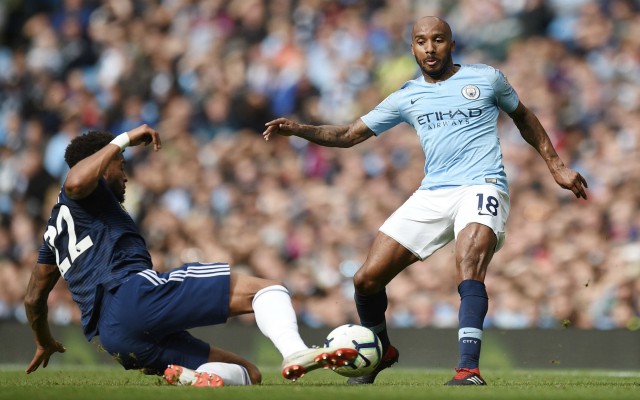 Delph in action for Man City

The Premier League champions are expecting offers to come in over the next few days, with Goodison Park mooted as Delph’s most likely next destination.

Guardiola will have little use for the Englishman next season if Mendy comes back fully fit and raring to go, especially now that he has bolstered his midfield ranks even further by bringing in Rodri from Atletico Madrid for £62.5 million – as per Sky Sports.

Delph certainly won’t be granted a role across the middle of the park and it seems that he is no longer needed as a full-back either, despite still playing regularly for his country at international level.

In order to stay a part of Gareth Southgate’s plans in the coming years, he will need to be playing regularly and Everton may be the ideal place for him to rediscover his best form.