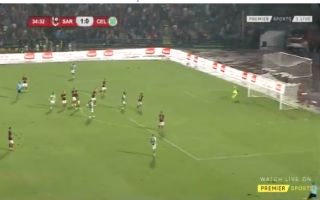 It was starting to look ominous for Celtic with FK Sarajevo taking the lead in their Champions League qualifying clash on Tuesday night.

Mirko Oremus had given the hosts the lead after just 29 minutes, but there was relief before half-time for the away side.

Mikey Johnston repaid Neil Lennon’s faith to start him by thumping a long range effort in to level the scores, as seen in the video below.

? Mikey Johnston with a magical equalizer for Celtic! pic.twitter.com/vgyKg5dURP

READ MORE: ‘Bang average and not worth £15m’ – Celtic legend hits back at want-away midfielder

Former Celtic ace Chris Sutton was on commentary duty for the game, and insisted that Johnston was Celtic’s best player in pre-season, and that showed as he stepped forward to drag them back into the game.

In an encounter without many clear-cut chances, Johnston’s away goal could prove vital in the overall outcome of the tie as the Scottish champions will look to avoid a disastrous exit as they hope to seal their place in the group stage of the Champions League this season.