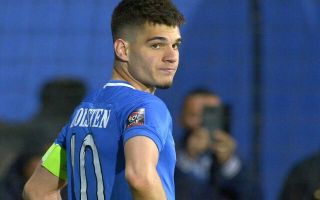 According to AS, Barcelona are planning to sign Hagi before loaning him to fellow La Liga club Real Valladolid for the next season. A majority of Real Valladolid is owned by former Barca player Ronaldo.

He had a terrific 2018/19 season, scoring 14 goals and providing eight assists across all competitions as Viitorul Constanta finished third in Liga I and won the Cupa Romanei.

Hagi’s performances for Viitorul Constanta earned him a call-up to the Romania national team. He has made five appearances for the national team so far. Hagi was a key player in the Romanian squad that reached the semi-finals of the recently concluded UEFA U21 Euro in Italy and San Marino. The 20-year old scored twice and also provided an assist during the tournament.

Gheorghe Popescu, the chairman of Viitorul Constanta and the brother-in-law of Gheorghe Hagi said that both Barcelona and Spartak Moscow are interested in signing Hagi.

Popescu seemed to contradict AS’s reports by claiming that Barca were keen on signing Hagi on loan from Viitorul, rather than buying him outright and loaning him to Valladolid. And Popescu has no interest in loaning out his star man.

As quoted by Sport, Popescu told Romanian TV: “There’s real interest from Spartak Moscow. There’s interest from Barcelona, too. There have been discussions, but the project from Barcelona doesn’t interest us because they would take Ianis on loan. Ianis has reached an important level, given many good teams are interested.

“I think Ianis can play in any league. I think he can still mature, but he will grow in the next two to three years. He was really good at the Euros. There have been negotiations with clubs but the player is on holiday now. He will analyse the offers and choose the right moment.  I am only talking about concrete offers, not just conversations. I had direct meetings with all of the clubs that have made an offer for Ianis.”