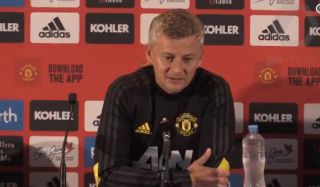 Manchester United manager Ole Gunnar Solskjaer has hit out at the way the media have misrepresented Paul Pogba this summer.

The France international has been in the headlines as ever with the Times strongly linking him with Juventus and quote his agent Mino Raiola as pushing for a move.

"We are Man United – we don't have to sell players" – Ole Gunnar Solskjaer on #MUFC transfer speculation, Paul Pogba & the supposed bust-up with Jesse Lingard pic.twitter.com/2cPDZK2SAq

Many Man Utd fans are fed up with the circus surrounding Pogba, whose performances on the pitch have hardly made it worthwhile.

However, Solskjaer launched a strong defence of his player, saying there is a media agenda when it comes to covering him.

The Norwegian tactician added that he’s never had any problems with the 26-year-old, defending his character and rubbishing reports of a bust-up between him and Jesse Lingard.