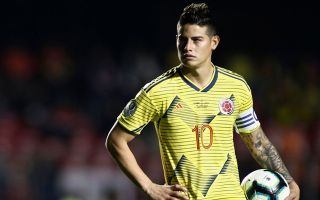 Real Madrid are edging closer to off-loading Colombia midfielder James Rodriguez in an attempt to vacate space for the potential arrivals of Paul Pogba and Christian Eriksen.

News in Spain suggests that Real Madrid and Napoli agree on the price which will see James Rodriguez leave the club, but the structure and timing of payment is yet to be agreed, according to AS. Napoli accept Real’s €42million valuation of the Colombian but are preferring a loan deal with an option to buy, whilst Real remain firm on a straight sale this summer.

James is not in Zinedine Zidane’s plans for the upcoming season, having just returned to Spain after a two-year loan spell at German champions Bayern Munich.

Cross-City rivals Atletico Madrid are also rumoured to be interested in signing James and have already shown their hand this summer with a record-breaking deal for Joao Felix. AS continued to report that Atleti are happy to pay the price Real have set, but predictably, Los Blancos would rather sell James abroad than to a La Liga rival. James’ Father has also had his say on the saga hinting at a stay in the Spanish capital in an interview with Cadena Ser:

“I don’t have arguments to say whether Napoli or Atletico,” he said. “James already knows Madrid, Spain and has a house in Spain, that would be my only argument, that has nothing to do with the opinion of James.”

The implications of James leaving Real Madrid would be bad news for fans of Manchester United and Tottenham Hotspur, as Real’s predicted summer clear-out swings into gear with AS hinting at Paul Pogba or Christian Eriksen as the most likely incoming. Midfielders Dani Ceballos, Marcos Llorente, Isco and James have all been touted with moves away as Real look to revamp their ailing squad in an attempt to mount a serious challenge to Barcelona for La Liga 2019/2020.