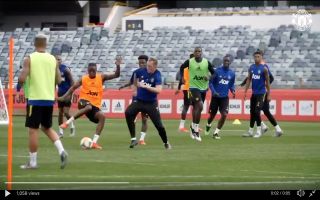 Manchester United new boy Aaron Wan-Bissaka is already impressing for the Red Devils, the star dazzled Phil Jones with a lovely piece of skill during training.

Summer signing Aaron Wan-Bissaka looks like he’s settled in at United perfectly following his marquee move from Crystal Palace, the England Under-21 international showed fans that he has fancy footwork in his locker by dazzling defender Phil Jones with a lovely turn during preseason training on the team’s tour of Australia.

Wan-Bissaka fooled Jones with a perfect Cruyff turn, whilst fans will be excited to see the youngster making his mark already – it will also remind them that their defensive problems are very serious and they’d be taking a massive risk by heading into next season with the same contingent of underperforming centre-back’s.

The Manchester outfit had to splash the cash to land the ace’s signing, according to BBC Sport, the Red Devils parted with a £45m initial fee to prize Wan-Bissaka away from the Eagles.

Take a look at the impressive piece of skill below:

Wan-Bissaka sent Jones for a pasty in Perth pic.twitter.com/unIJhn8MFS

Wan-Bissaka is making quite the impression at United already, the former Crystal Palace star made a superb tackle on Juan Mata during one of the Red Devils’ earlier training sessions. Check it out here.

Check out some reaction to the star’s sensational skill below:

AWB sending Phil Jones for a hot dog is brilliant ?

Wan-Bissaka looks like he’s raring to go for the Red Devils, the youngster looks like has all the tools to fix United’s full-back problems.