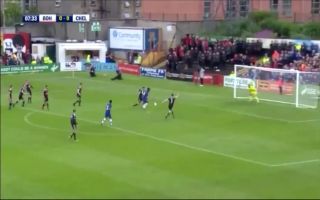 Enigmatic Chelsea star Michy Batshuayi has scored the Blues’ first goal under Frank Lampard this evening, the Belgian hit the back of the net against Bohemians FC.

Batshuayi – who spent the second-half of last season on loan at Crystal Palace – opened the scoring in the 7th minute of the preseason encounter.

The Belgian ace showed that he the natural instinct to be in the right place at the right time after versatile ace Kenedy’s shot at goal was deflected, the forward managed to win the battle for the ball and successfully held off his defender before rifling the ball into the back of the net.

Given Chelsea’s lack of superstar options up front, it’s expected that there will be a battle between Olivier Giroud, Tammy Abraham and Batshuayi for the chance to lead the line.

Batshuayi will be happy to have drawn first blood in the fight for a starting berth.