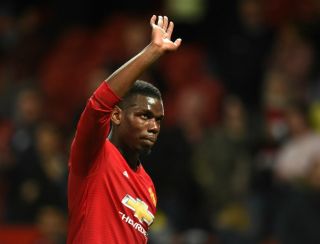 Speculation remains rife over Paul Pogba’s future at Man Utd, but despite his agent suggesting that he wants to leave, Gabriele Marcotti has claimed it’s not so clear cut.

The 26-year-old enjoyed the most productive season of his career to date last year, scoring 16 goals and providing 11 assists in 47 appearances.

In turn, it’s easy to see why United and Ole Gunnar Solskjaer will be desperate to avoid losing him this summer, as he remains their most talented midfielder in the squad and by some distance.

As noted by BBC Sport, it has previously been said by his agent Mino Raiola that he wants to move on this summer, although he has since changed that stance slightly by claiming that they are looking for a ‘satisfying solution’ to the matter, as per BBC.

Naturally, that has done little to stop the ongoing talk of a departure, but with that in mind, Marcotti has offered his insight on the situation and his sources have told him that Pogba is looking for a resolution which doesn’t necessarily centre around an exit.

As seen in the tweet below, the respected journalist was talking to ESPN, and suggested that Pogba either wants to commit himself to Man Utd and receive assurances from the club about strengthening the squad to compete for major honours, or if not, then perhaps an offer that satisfies everyone should be accepted, and a move elsewhere could happen.

Ultimately, that seems like a fairly balanced position to take on the situation for any player with ambitions to win trophies and compete at the highest level, and so much will now seemingly depend on who else joins Man Utd this summer following the arrivals of Daniel James and Aaron Wan-Bissaka.

Having failed to qualify for the Champions League last season and ended up trophyless, that’s not going to be considered acceptable for anyone connected with the club, and so it shouldn’t be any different for Pogba with his peak years ahead of him.

Marcotti: "What I've been told, is that Pogba is not desperately itching for a move. He wants a resolution, a way forward. Either a new contract and commitment from the club about the squad, or if there is an offer out there and it works, moving elsewhere." #mufc [ESPN]