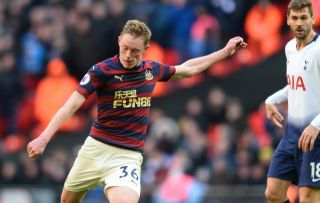 Manchester United have reportedly been left stunned after being quoted a £50million asking price to seal the transfer of Sean Longstaff.

The Newcastle midfielder has long been linked with the Red Devils this summer, with the Guardian even reporting he was on the verge of leaving St James’ Park for Old Trafford.

Longstaff makes sense as a target for United due to his similarities to club legend Michael Carrick, whom the club are still to truly replace since his retirement in 2018.

However, it could be that Man Utd will now struggle to bring the 21-year-old in as the Manchester Evening News report that he’s set to be too expensive.

According to the MEN’s report, United initially hoped to open talks over a deal worth around £20m for Longstaff, before being quoted more than double that.

MUFC could do with more signings this summer after only bringing in two youngsters so far in Aaron Wan-Bissaka and Daniel James.

Still, Longstaff is surely not yet worth £50m after not even truly establishing himself as a first-team regular for Newcastle.