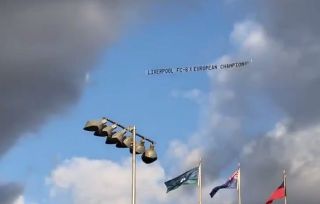 Man Utd have seen their training camp in Perth overshadowed by a banner flown over their session trolling them by a Liverpool fan.

As seen in the video below, in a hilarious stunt likely paid by Liverpool fans in Australia, a banner was flown over the United camp reading: “Liverpool FC – 6x European Champions”.

It’s not a statistic or fact that United fans or the club need reminding about in truth, and was likely to be an unwanted distraction for all concerned.

Having said that, it’s still pretty funny that a fan or group of fans paid to get it done to troll their old rivals, who are currently in Australia preparing for the new campaign.

It could work the other way though too, as it’s ideal motivation for the players to try and bounce back next season and silence the Merseyside giants who will be gunning for more major trophies next year as they appear to be building real momentum under Jurgen Klopp.