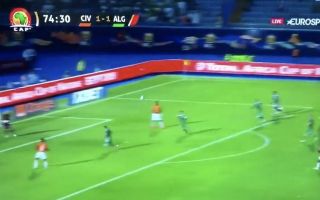 Crystal Palace winger Wilfried Zaha’s horrendous miss for Ivory Coast against Algeria may leave some Arsenal fans questioning why he is on the club’s radar.

The Gunners submitted a £40 million bid for the 26-year-old earlier this summer, which the Eagles swiftly rejected, but Unai Emery is expected to green light an improved offer in the coming weeks – as the Daily Mirror reports.

Zaha supported Arsenal in his youth and hopes to push through a transfer before the start of the new season, but Palace are holding out for a fee of around £80 million – as per the Mirror.

The Ivorian failed to justify that price tag in an Africa Cup of Nations quarter-final clash on Thursday night, as his country exited the competition following a penalty shoot-out defeat to Algeria.

Things may have been different had Zaha finished off a glorious chance in the 74th minute of the game, but his horribly mistimed effort flew out for a throw-in.

Check out the Arsenal target’s embarrassing miss below, via Twitter.

Wilfred Zaha trying so hard to justify why Crystal Palace is asking Arsenal for 80 Million.
This is pure Arsenal class. Such a beauty to watch, we will watch this over and over again for years.pic.twitter.com/bor11xYlz9#CIVALG #TotalAFCON2019 #AFCON2019

Wilfred Zaha shows why the Gunners really want him. Fantastic stuff here that you’ll rarely have a priviledge to watch?#CIVALG pic.twitter.com/GIgVQFhbkR